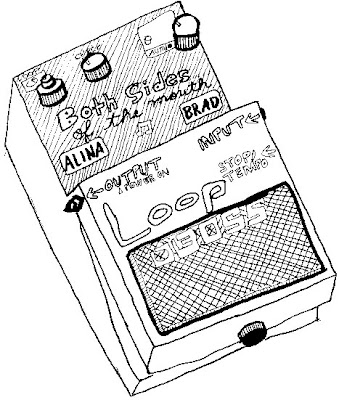 The first time I heard a successful loop, I was standing in The Backyard with a protective body behind me. Damien Rice was onstage performing his last song. He would play a bit, press the pedal, and the bit would play over again and again and again. While the bit played he would play another bit or sing a different bit, hit the pedal, and again the bit would play. He did this again and again until the entire venue in which I was standing was reverberating with the sounds of this loop, this steady stream of song, that seemed to echo every emotion, every thought, every passing feeling of mine. I leaned backwards into that protective body and cried with the overall beauty of the moment.

Since then I have discovered many other successful loops.  Although undoubtedly more impressive live, these loops are still enjoyable in their recorded form.

mp3 Mimicking Birds- The Loop
So aptly named. I actually saw them perform this song live at Ram's Head in Baltimore when they were opening for Modest Mouse.  It was the first time I heard the band and this song took my breath away.

mp3 CocoRosie- Noah's Ark
I originally posted on this sisterly duo four years ago. Pretty much every CocoRosie song involves heavy looping, but this is my favorite example.

mp3 The Faint- Agenda Suicide
The Faint uses looping in every song as well, but the construction of the beat is especially nicely presented in this song.

mp3 Hot Chip- Playboy
There are so many looped elements in this song, including the despondently sung chorus, it makes the perfect example of successful looping.


Check out my other, personal blog, You Army. Latest post also entitled "The Loop."
Published at 3:05 PM by Alina.
2 comments
2 Comments:

Anonymous said...
Juana Molina and Zoe Keating both use the "live" loop in masterful ways.
6:04 AM

Kat said...
I was at the RATATAT show.. It was amazing.
5:57 PM
Post a Comment
<< Home
Search the Site
Both Sides of the Mouth is a dual-authored mp3 blog based in Austin, Texas. All audio posted on this site is meant for sampling purposes only. If you really like what you hear, show it and support the artist - buy an album, buy some merch. If you represent or own any media on this site and would like something taken down please email us, and we will take the neccessary action of removing the file(s).

These Kids Are Serious
Spinner
Pitchfork